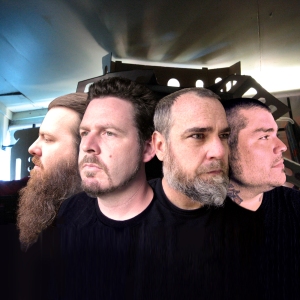 Nomenclature matters. A stated name is often where the flow of information begins. A grouping of titles, pointedly labeled, furthers the flow. But how this and so much other cumulative information is interpreted  and indeed, what actually happens to it along the way, not to mention the multifarious bypassed possibilities  all such issues involve great uncertainty. One must make of it what one will, can  or won’t, as it were

San Diego-based modern music-makers Aspects of Physics are not, as the name might (to some) imply, fixated on considerations of said field of science. No. “Physics” here refers to the SD group of seven years (fore)running, formed in 1993, that exhibited a distinct unhurried minimalism, blending organic rock tropes and electronic elements in a slew of slow-cooked stews.

Comparisons to storied Krautrock acts were inevitably drawn but Physics was its own beast, at once loud and subtle, lumbering on to the new millennium with both membership modifications  e.g., the still-mourned 1994 demise of sensitive soul Denver Lucas  and constants. (Rob Crow [Pinback, Goblin Cock, Optiganally Yours, Thingy, Heavy Vegetable et al.] is said to have never really been officially enlisted, but when he consistently showed up guitar-in-hand to make valued contributions at his Physics pals’ gatherings, he became an assumed, enduring part of the equation.)

Emerging in 2000, Aspects of Physics was simply a shifting development of core musical ideas and reduced personnel. With some humorous understatement that already might belie impressions of over-seriousness gained from contemplating their heady moniker, the AoP guys transcribe the transition:

“Physics was six people, no one in charge, trying to play music together  originally, 45 minutes on one chord; later, ten minutes on on riff, four times in a row. Physics broke up under is own weight and we wanted to continue but start using computers and go into new territory. More computers/less people. And originally, more IDM/less rock, though in recent years that balance has shifted back and forth depending on the focus of the release and live performance needs of players involved.”

Following AoP’s 2002 debut album Systems of Social Recalibration, 2004 saw the launch of their Marginalized Information Forms series, an eventual trilogy conceived by AoP principals Jason Soares and JFRE “Robot” Coad. It collectively offers a “triperspectival” strategy in helping to discern, roughly, what we know, how we know what we know, can we trust what we know given where it comes from (perhaps unknown  which we should try to know ), and which factors come into play on all sides of this.

The sound of MIF One: Ping was a merging of electronics with guitars, the objective being to convey a “human experience/observer” feel. Judiciously limited use of the stringed instrument with synthesizers, computers and altered electronic devices did indeed combine into a collection of experimental yet melodic soundscapes; it was a more circuit-board-driven take on some ideas going back to Physics days (with former members of same contributing).

2007 brought the trilogy’s second installment with MIF Two: Cummulative ErRror, an all-electronic effort from just Coad and Soares, exploring the “medium/carrier/vessel” role with well-wrought tracks ranging from the ambiently adventurous to catchy glitch-pop, some oozing a curious species of machine funk (see title track and “Blipsklippel”). Unfortunately, Cummulative ErRror was a low-profile release  for one thing, it didn’t benefit from the exposure that Ping got when AoP toured earlier this decade opening for Pinback, etc.  and its discreet charms deserve some retroactive engagement.

Finally, July of 2009 marks the release of the Marginalized Information Forms endeavor’s closing chapter. MIF Three: Other, focuses on matters of an “actual/source” nature with three guitars, sundry synths and computers and, significantly, live drums. Coad, Soares and Rob Crow are joined by veteran San Diego trapsman Arturo Ulloa III (Physics proper, Chune, Violador[a], HorseFuck, Napo, etc.), who delivers on record the tricky pacing featured in recent years in Aspects of Physics’ live shows. (Indeed, a track like the disc’s “That Which Resists,” with its warmly entrancing wash of sonic waves, suggests a live band at play, steadily unfolding its undeniable audio allure.)

It’s not so much a return to the earlier Physics sound as an evolved appreciation of it, a refinement and advance  and something that still sounds unto itself  Yes, even with an acknowledged point in all those comparisons to  invoking alphabetical randomness here  Aphex Twin, Autechre, Battles, Can, Four Tet, Fridge, Mogwai, Neu!, Schulze, Slint, Squarepusher, Stockhausen, Tangerine Dream, Tortoise

“Ideally, we would be a perfect mix of rock, electronic, experimental, punk ” confirm the Aspects of Physics folk. “We’re a multi-tiered project. Going between more rock-like live performances, music for the recorded experience  music where the recording is the music  along with video and visual and art and philosophy.” (Aside from being the designated “AoP mascot” and mastermind behind the AoP alter ego/side project “w0rkf0rce,” veteran veejay Matt Lorenz [Three Mile Pilot, etc.] warrants laudable mention for his important visual [and more] input as a team player. And additionally notable, all of the other AoP-eople have aesthetically-oriented [a]vocations: Coad is a visual artist [www.landfillgraphics.com]; Soares is also a visual artist and computer programmer/internet blaster; Ulloa is an esteemed glass-blower; Crow believes one can never start/play in too many bands )

All this/that put them in a position to produce a sequence of interrelated collective statements on information flow with a potentially far-reaching resonance  observations in sound that may be more or less abstract depending on perspective and perceived meaning.

“In conceiving the Marginalized Information Forms, we realized we were making music all over the spectrum so we decided to group similar tracks onto separate listenable albums with three different, though somewhat overlapping, themes. Thus, by name, MIF 1, 2, 3.”

Utilizing a diverse array of machinery and programming is part of how they do it.

“We’ve managed to amass quite a collection of useful and not so useful equipment over the years: from home-made, circuit-bent, custom software, vintage synths, laptops, electronic drums & gadgets, to the more traditional guitar and drum variety”

And, of course, no matter what something is supposed to sound like  say, what the name you know that item by implies it should sound like, etc., etc.  Aspects of Physics make a point of breaking up that conventional information flow themselves to creatively communicate.

“We always look for a piece of equipment or software’s unintended use: what can it do, that is unique to itself, that will produce something unexpected and useful, when used in a non-standard way.”

Really, it’s almost never “all in the name” after all. Info is a slippery pup, a dicey prop. And any assemblage of verbiage should be carefully considered for accuracy, intent, and so on; seeking out some appropriate Marginalized Information Forms may help